Chippenham Lions estimate that more than 2,000 people were present at the ‘Cherished Vehicle and Family Fun Day’ held last year in the fields of Meadow Farm Nurseries at Langley Burrell.

This was the first year we had held it at this new venue so a lot of planning went into making this show happen. Nonetheless, we had success to build on and like the previous years we were able to deliver an event which had something for everyone – the cars, the food village, the arena, the fairground and the stalls.

The weather started well with bright sunshine and reflections bouncing off the bodywork. The cherished cars started to arrive from about 9:00 and by 9:30 there was, a never ending stream of vehicles of all types. Indeed, one of the features of this event is that there is no restriction on vehicle type or age and as a result there was a huge diversity from classics, kit cars, working vehicles, muscle cars and rare breeds.

Everything was nicely in place when the doors opened to the general public at 11:00 and the event was then formally opened a little later by our President Sue Gilbert and our guest Chippenham Mayor, Cllr Desna Allen.

The cars themselves, as usual, were meticulously turned out by their proud owners and the early sunshine allowed them to be seen at their best. Amongst the individual entrants were many owner’s clubs represented by marques as diverse as TVR, Jaguar, MG, Marcos, and Morgan. Indeed, many clubs now use the event as a scheduled club meet.  It always gives a good opportunity for the owners to meet old friends and to make new ones, to exchange technical information and to reminisce.

This was the fifth year we had run the ‘The Bob Astwood Memorial Trophy’ for a cherished vehicle. This year we decided to enlist the help of three judges who are regular visitors to the event – Don Westcott, (Wiltshire Jaguar Enthusiasts Club), Colin Truman, (TVR Car Club) and Russell Harding, (Colerne Classic Car Club). The trophy was awarded to Adrian Paget and his family for beautifully restored 1966 Land Rover Series 2A and you can read more about that on the ‘Bob Astwood Trophy’ page.

We had a full arena programme with entertainment and we were visited for the first time by The Sahara Sisters, and then (to make you go ahh) The Britannia Majorettes and Minorettes, then Dee Dee Wilde (off of the telly) with Pam’s Fans and (more ahh) Expression Street Dancers. And in-between times, the 4+1 Jazz band played for us. Top entertainment…

It was a wonderful day all round, and the Chippenham Lions are very grateful to all those who attended and we hope they all had a good day. We are particularly grateful to Derek and Alison Upton of Meadow Farm for the use of their fields and for the work that they personally put into the event. We were also grateful to be supported by the Community Police Cadets who helped us with car parking. It was a hardworking day for us and the culmination of many months of preparation and all Chippenham Lions are proud to have been part of it especially as it has now become an established part of Chippenham life.

Forms are now available to book Vehicles and Stalls into the show. Follow the Bookings menu tab 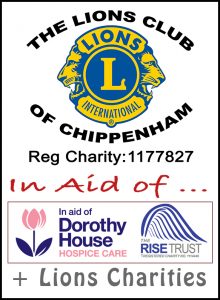